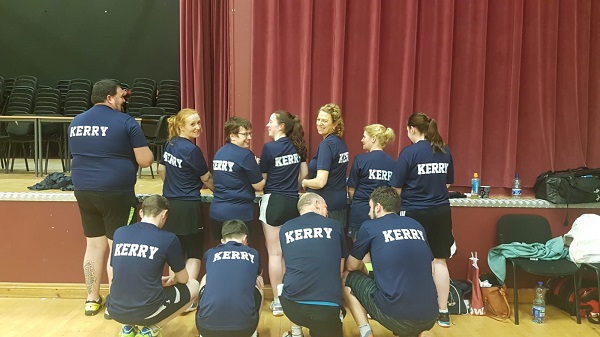 Waterford Institute of Technology and Cappoquin Community Centre played host to the final Munster Intercounty Championships of the season last Sunday (Feb 17th). Kerry sent teams to the D grade competition in WIT and the F grade team in Cappoquin and will hopefully send a H grade team in the years to come.

Under the stewardship of Eric Nelligan many of this D team also featured on the C team that ran Cork very close the previous week so hopes were high that they would do well in this event.

First up the faced the challenge of Tipperary and Kerry were 3-1 ahead after the ladies and men’s doubles pairings with Elaine Hudson & Maeve Twomey, Paddy Redmond & Fergal Hannon and Sorcha Fitzgerald & Niamh Hickey all winning their games. Sinead Galvin too Kerry a step closer to securing the win when she overcame her opponent in the Ladies Singles and Kerry then took two of the three mixed games with wins for Alan Nelligan and Maeve Twomey and Fergal Hannon and Niamh Hickey making it 6-3 to Kerry overall.
Next up Kerry faced a Waterford side that had been heavily defeated by Cork in the first round. This however turned out to be an extremely tough battle for Kerry. It was 3-3 going into the singles as Hannon and Redmond and Hudson and Twomey won doubles again as did Galvin in the singles. Wins by Nelligan and Twomey and Hannon and Hickey got Kerry over the line 5-4

Kerry could now secure the title with a win over Cork. Kerry found themselves at 2-2 after the ladies and men’s doubles through wins by Hudson and Twomey and Nelligan and Hannon. However Kerry lost both very close singles matches meaning at 4-2 down going into the mixed they were under extreme pressure. Although Twomey managed to retain her impressive 100% record on the day with 6 wins when partnering Alan Nelligan Kerry were defeated in the other mixed game meaning Cork took the title 5-3 and Kerry finished as unlucky runners-up. 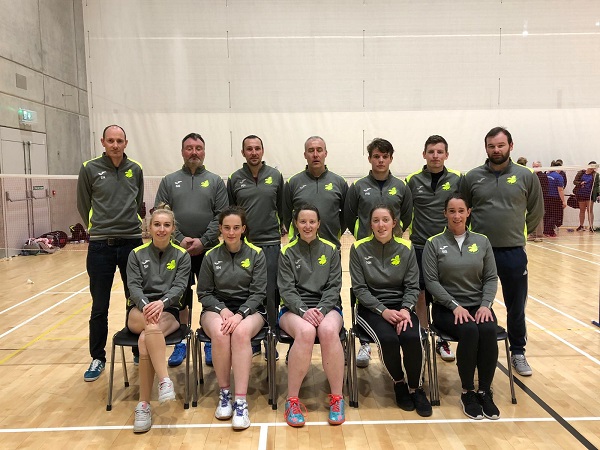 Kerry then got off to a great start against the home side Waterford. They were leading 3-0 after wins in the Men’s Double by Jamie Elliott and Niall O Brien and Aidan Evans and Cathal Donovan. Carmel Hudson and Griffin made it 3-0 in the Ladies doubles. Kerry added another point through a win by O Brien in the singles and when Carmel Hudson and Elliott took the first mixed Waterford were out and Kerry won 5-3.

Unfortunately for Kerry they came up against an extremely strong Cork side in what was effectively a semi-final after this. At 4-0 down after the ladies and men’s doubles things were looking ominous for Kerry. Niall O Brien gave the Kingdom a glimmer of hope when he won his Men’s Singles game but Cork were 5-1 down and out after the ladies singles and Cork when through to the final where they were beaten by Tipperary. 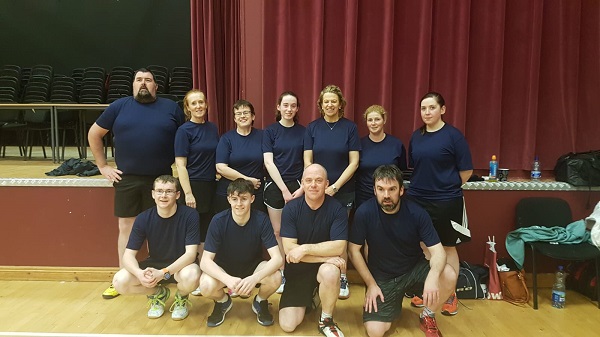 Well done to the managers and all the players for the commitment they have given in training over the past few months. Kerry will hopefully be back winning Munster Inter-County titles next season and hopefully a few clubs, individuals and doubles partnerships can come good at Munster level before this season is out as there is still a long way to go.